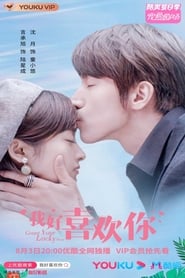 Lu Xingcheng was used to having the world at his feet until he lost everything in an instant. Tong Xiaoyou used to be eternally jinxed until the day she became famous overnight. CHIC editor Lu Xingcheng has a haughty personality and a sharp tongue. In the fashion world, he is a legendary figure and famous for being lucky. Tong Xiaoyou is an unknown designer who is unlucky in everything that she does. An accident causes their lucks to be interchanged and their lives take a drastic turn. As Tong Xiaoyou gets to know Lu Xingcheng, she gradually learns about his hidden past and discovers a man who yearns for family despite his arrogant facade. Tong Xiaoyou wants to help her idol return to his former glory, but his egotistic tendencies can be hard to deal with.

Disclaimer: Images, articles or videos that exist on the web sometimes come from various sources of other media. Copyright is fully owned by the source. If there is a problem with this matter, you can contact here.
Original title 我好喜欢你
First air date Jun. 30, 2020
Last air date Jul. 07, 2020
Seasons 1
Episodes 2
Average Duration 45 minutes
Shared0 Facebook Twitter
Loading...